Retargeting is one of the most successful online marketing features. By using cookies, advertisers can target their ads to users who previously visited the advertiser’s website and, for example, have viewed the product but ultimately did not decide to buy it. Advanced retargeting networks use display banners featuring the exact product(s) that the users previously viewed.

The target audience is narrowed to small group of potential customers, and can be run on low-cost placements. For this reason, retargeting ads usually have very good post-click conversion ROI, much better than in any other type of display advertising.

Retargeting providers (including Google, who name it remarketing) use this argument to persuade advertisers to spend more money on retargeting ads, especially that for many advertisers it is the only form of display ads that brings positive ROI measured by post-click, last-click conversions. 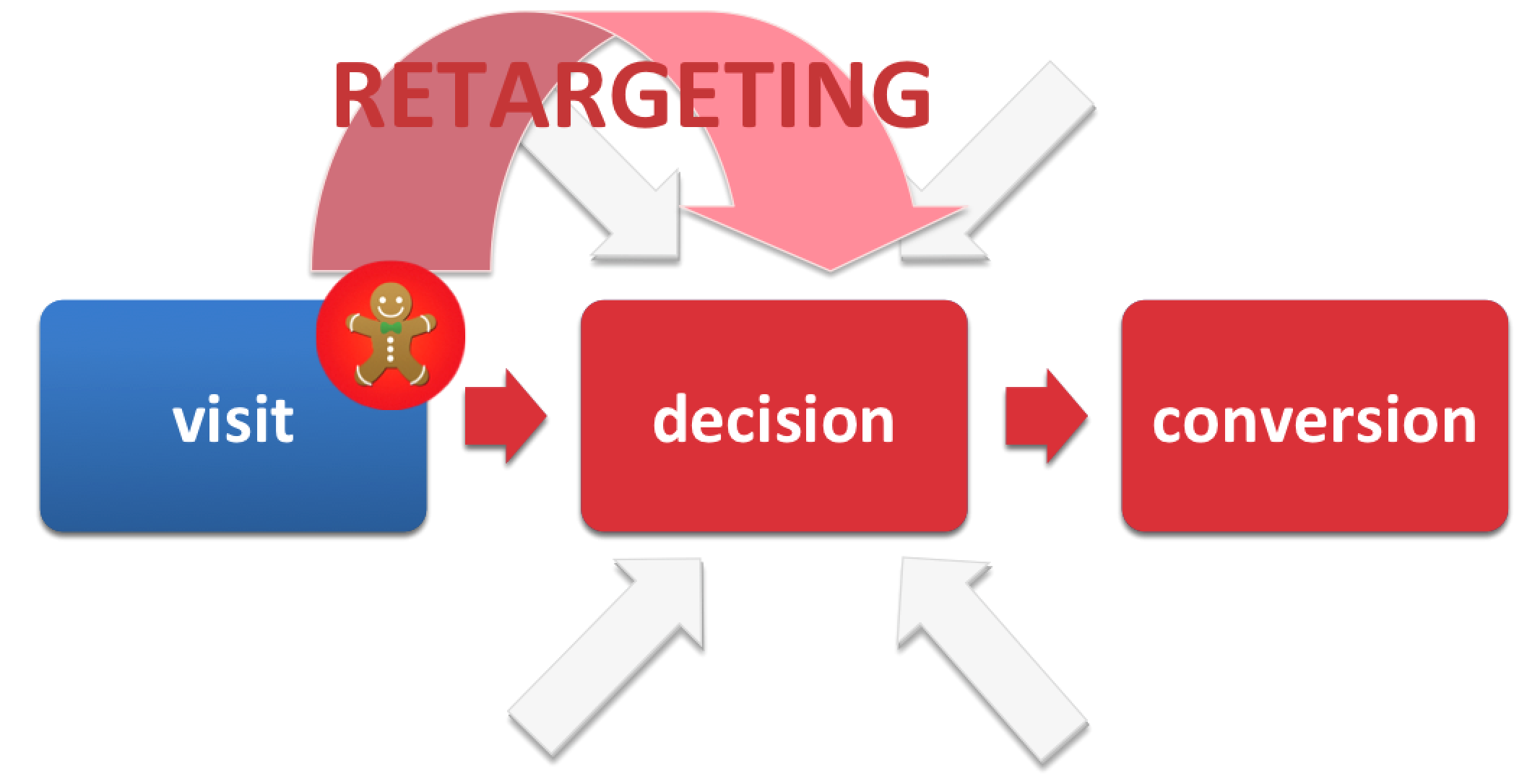 Retargering providers very often claim that retargeting has positive impact on conversions even without clicks, and persuade advertisers to look at post-view conversions. However, this is a manipulation.

Usually, certain time elapses from the click to conversion (see the example below).

The retargeting ads are served to visitors who started the purchase process. Some users will click the retargeting ad and buy, but a significant part of them would buy this product without seeing the ads too. Many users who convert may not even view the ads served, but the system will still show the post-view, or precisely: post-impression conversion.

At the moment, the most popular web analytics tools are not ready to measure the actual attribution of the last-interaction and assisting clicks and impressions/views. The fact, that interaction (a click or impression) appeared in conversion funnel, does not prove that it had positive impact.

Numerous studies show that during the conversion process, customers interact with advertisements served by competitors. However, it is hard to believe that these interactions could increase sale of our product, and most likely, competitor ads have negative impact on our conversions.

Of course, we should rather not expect that the impact of our own ads can be negative, but what is the actual attribution to the conversion, is it 1%, 10%, 30% or more? Maybe the ads have negative ROI, because majority of ad spending goes to target visitors who would buy this product anyway?

For sure, retargeting does not have 100% attribution in conversion. This is because we have previously paid for each user who converted from retargeting: in SEM, display, social media, e-mailing. Even if the original visit was a direct visit, it was result of brand awareness investments. For this reason, the post-click conversion ROI of retargeting ads can’t be compared with, for example, search engine sponsored link for non-brand keywords.

Concept of the experiment

In case of remarketing, we can, however, run an experiment that will show the exact ROI of retargeting campaigns.

We assign to each user who visited the website, on a random basis, a Google Analytics custom variable with a value of “A” or “B”. It is a user-level variable (not session-level or page-level), and re-visit does not overwrite the value.

Then we use Google Analytics remarketing list (custom variable “A” and “B”) and display the remarketing campaign only to the users from the “A” list. 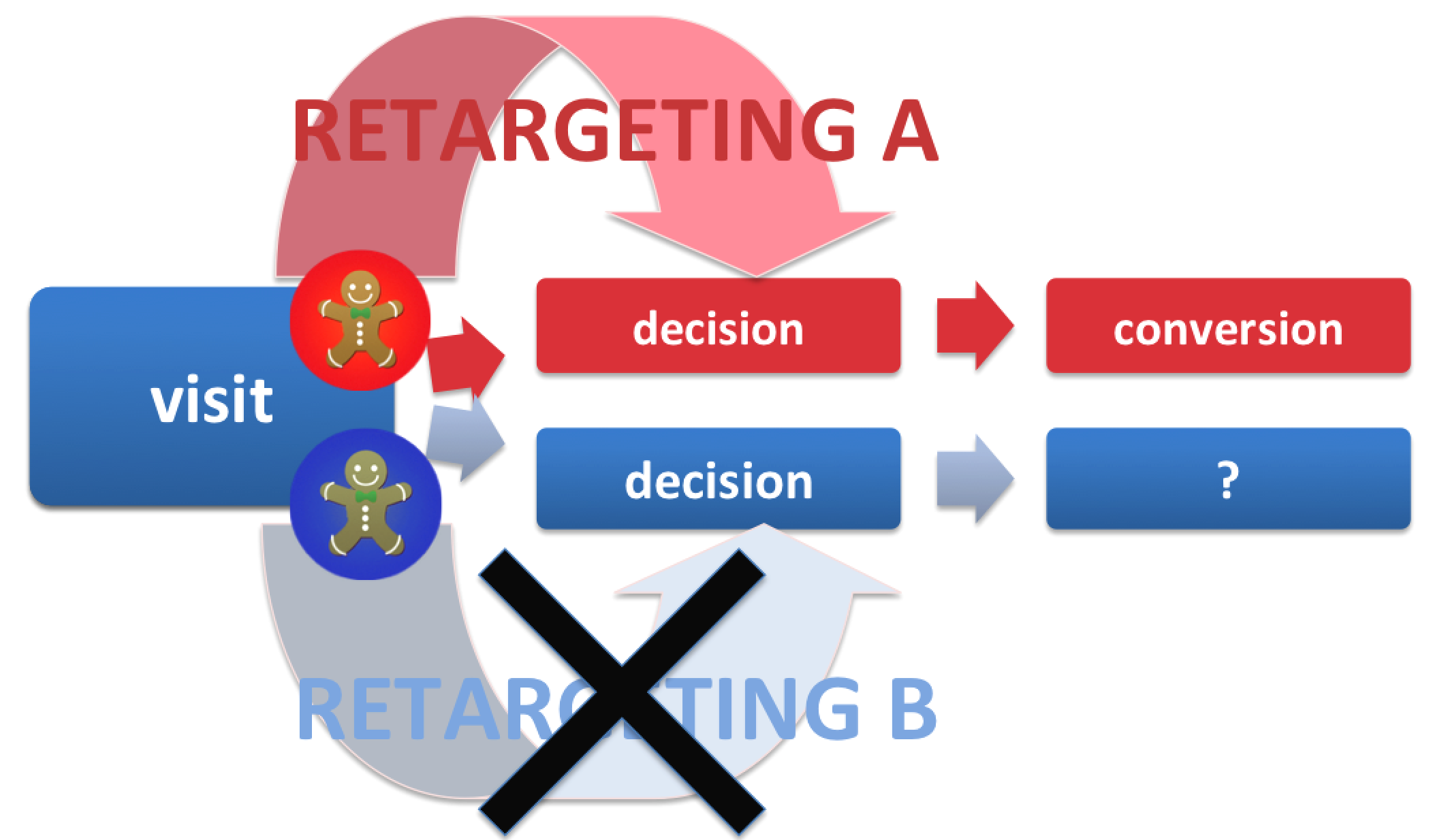 In other words, the potentially retargeted users are divided in two statistically identical populations, “A” and “B”, of which only the population of “A” is subject to remarketing. Comparing conversions in both populations, we will be able to determine to what extent the remarketing has increased the number of conversions.

The stages of the experiment

We measured visits and e-Commerce transactions (purchases). The experiment, run on an e-commerce website, was divided into stages:

2. Remarketing only in the “A” group  – Remarketing in the “B” group has been turned off.

3. A = B – Remarketing for the “B” group has been re-enabled. This stage is split into two parts:

Step 1 (A=B). The purpose of the first step was to ascertain that the two populations of “A” and “B” are statistically identical. Number of visits and transactions in groups “A” and “B” turned out to be almost identical (the difference was much smaller than ± 1%), and other metrics, such as visit duration and pages per visit were almost the same.

Step 3a (P). Having restored remarketing in the “B” group, the number of visits in “A” and “B” became identical again, but during the first three days, the “A” group had still about 15% more transactions.

Step 3b. On the subsequent days, the number of transactions in “A” and “B” became similar again.

How is this possible? This experiment confirmed that the impact of online advertising is not only click-based. Advertising banners work, even without being clicked. Nobody clicks on the classic TV ad, nobody clicks outdoor or radio ads either, but these ads have impact on sales. 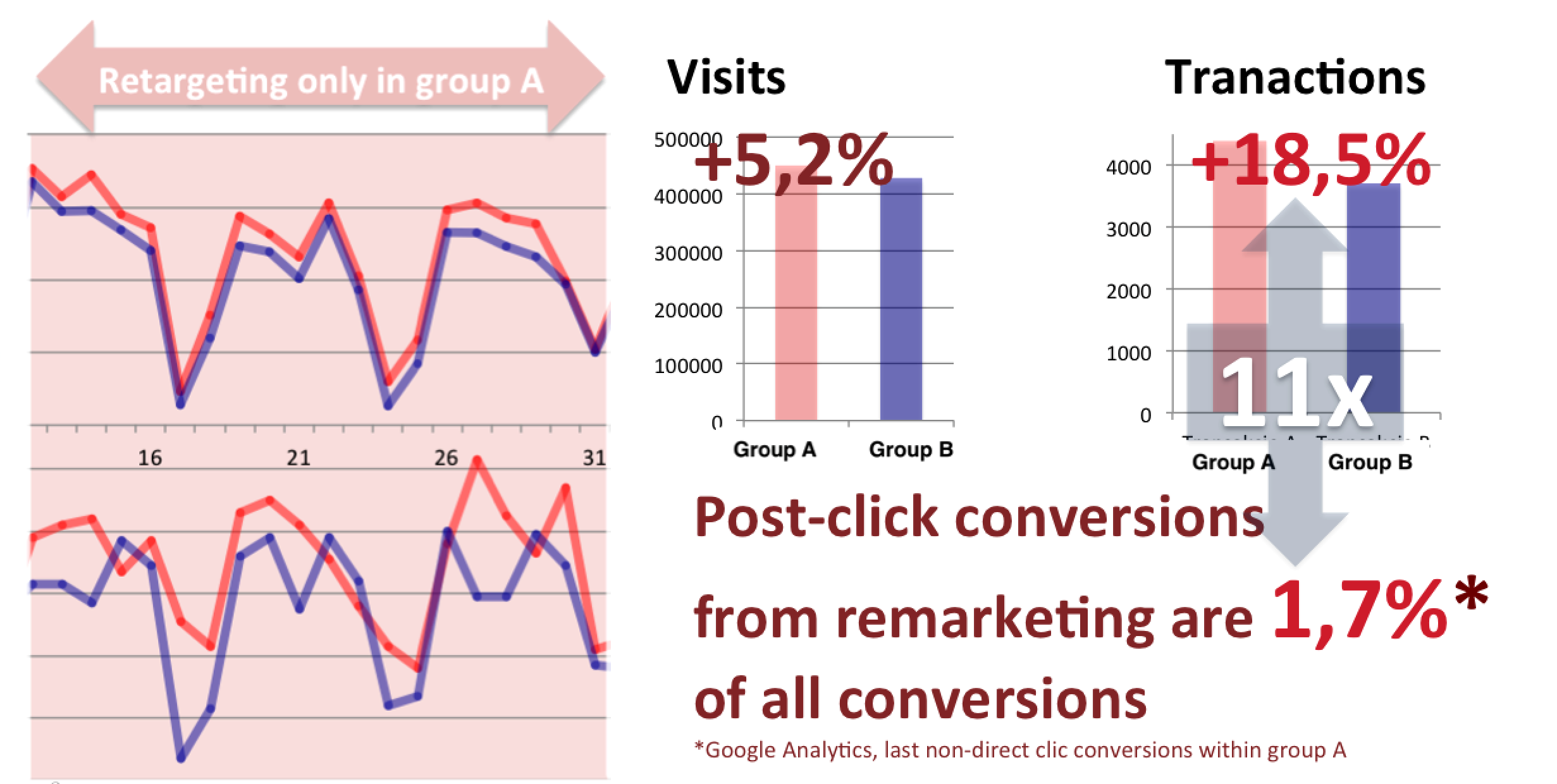 Interesting observation: during the experiment (Remarketing “A” only), Google Analytics has still reported significant traffic and conversions from remarketing source in the “B” group: 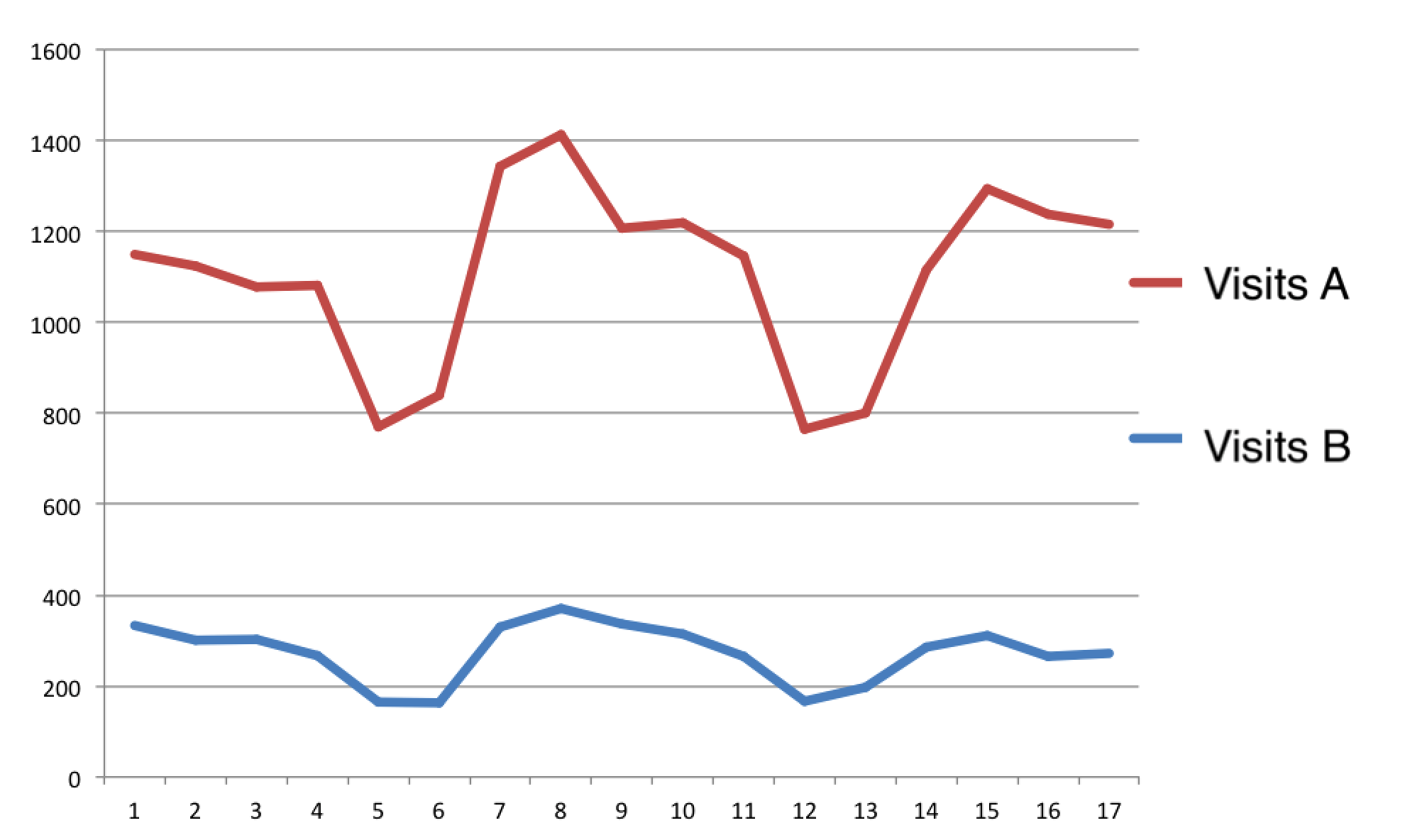 The reason is that Google Analytics assigns a traffic source to the last non-direct visit. Therefore if the user came to website from remarketing, and then, in the course of the experiment, he re-entered the website directly (direct visits), the source of this visit will be still shown as “remarketing” in standard reports. This, actually, shows that the difference between post-click and “real” impact is even higher than 11x.

For this reason, we encourage our clients to conduct this type of experiment individually. Please contact us if you need assistance.

You can read this article in Polish language (extended version).

We will send you emails about new posts on our blog and our offer.

From time to time Adequate will send you emails about new posts on our blog as well as about our offer. We will not share your e-mail with anyone. You obtain detailed information in the confirmation e-mail.